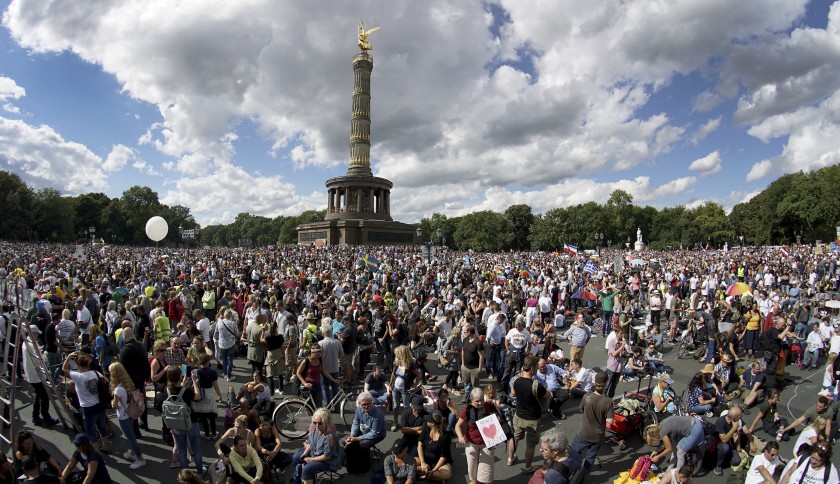 Protestors sceptical of the governments coronavirus measures are gathering again today for a rally in Berlin.

Yesterday August 29th, an estimated 38000 protestors participated in the anti-COVID measures protest which resulted in several hundred arrests. The government officials estimate much lower turnout at 18000 in the capital.

The protest came a day after the courts overturned a government ban against the protests, provided the demonstrators used masks and maintained social distancing.

Officers say the protest was mostly peaceful however most of the arrests were of those who were decribed as far right agitators, some of whom tried to gain entry to government buildings.

As with most protests worldwide, organized groups of militant protestors appear to take advantage of the number of peaceful demonstrators, and use the opportunity to cause damage and incite violence, in turn pushing the police to respond. The tactics are nothing new for extremists and damage the real message of the genuine protestors.

In March German Chancellor Angela Merkel announced a series of measures to try to curb the spread of the coronavirus, based on the severe predicitions of deaths that would result from the virus if nothing was done. Over the past few months the measures have been eased gradually, however the number of new infections has risen in recent weeks.

The main concern expressed by the protestors appears to be the economy. Many have been out of work for months. If people cannot provide for their family, what happens?

Common sense would normally dictate that quarantines are for those who are ill, not the healthy people. Now healthy people are being told to stay at home, restrict the hours they are in public, close their business and wait for the government to tell them when it is acceptable to resume their lives. Now the government is telling them this could go on for many more months, so people are becoming frustrated.

Merkel was quoted on Friday stating..."We will have to live with this virus for a long time to come....not everything will be the same as before the pandemic...."

Protestors argue the lockdown only prolongs the time the virus takes to run it's course.

Evidence seems to support this as many countries who imposed the strictest measures and maintained a low level of infections, are now seeing the number of cases rise, while those with the highest numbers are seeing case numbers level off.

As of Saturday Berlin had a total of over 242,000 cases and over 9000 death attributed to the virus.