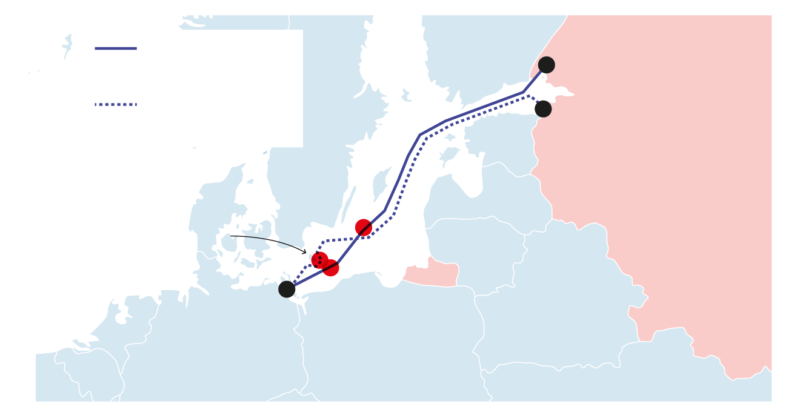 Gas leak was detected along the Nord Stream 2 pipeline near Bornholm island of Denmark, the Danish Maritime Authority says.

The authorities in Denmark can't rule out a deliberate act. Breaks in gas pipelines happen exceptionally rarely, stated the director of the Danish Energy Agency.

The Swedish National Seismic Network said two "probable explosions" had been recorded in the area of the gas leaks. The first was at 2:03 on Monday, before a second one at 19:03.

German federal authorities on pressure drops of Nord Stream pipelines: "Our imagination no longer yields a scenario that is not a targeted attack." Such a suspected attack has to be carried out with special forces, for example, navy divers, or a submarine, according to the German government's assessment.

The Swedish Maritime Authority issued an emergency alert warning: There are two leaks on Nord Stream 1 - one in the Swedish economic zone and one in the Danish economic zone....They are very near each other....Ships are being told to steer clear of the affected area in the Baltic Sea

In this Baltic Sea nautical area are the undersea Nord Stream 1 and Nord Stream 2 pipelines that transport Russian natural gas to the European Union through Germany, both of which are closed but are still full of fuelshortly after the emergency alert was issued, the German government formed the opinion that a loss of pressure in three natural gas pipelines between Russia and Germany was not a coincidence, but a targeted attack from either Ukraine or Russia

Nord Stream operators expressed concern "The destruction that occurred on the same day at once on three strings of the offshore gas pipelines of the Nord Stream system is unprecedented...It is not yet possible to estimate the timing of the restoration of the gas transmission infrastructure."

There is some media speculation that Russia destroyed their own pipeline as a false flag operation to gain support for the military and a call to arms. Considering the pipeline was already shutdown and was being used as a negiotiating lever to get European nations to drop sanctions against Russia in exchange for reinstating the much needed natural gas supply, and the amount of revenue it would generate for the Russian economy, it seems unlikely. Then again that is the purpose of a false flag operation.

The Guardian reports: "What is not immediately clear is how any attack would have been carried out. A submarine targeting the pipelines should have been detected in the Baltics relatively shallow waters, where depths rarely exceed 100 metres."

It is important to note, that in February of 2022, US President Biden declared "If Russia invades Ukraine, there will be no Nord Stream 2".

"BALTOPS, with the high degree of complexity, tested our collective readiness and adaptability, while also highlighting the strength of our Alliance and resolve in providing a maritime domain with freedom of navigation for all," said Vice Adm. Gene Black, commander, U.S. Sixth Fleet and Naval Striking and Support Forces NATO (STRIKFORNATO).

Part of the exercise involved submersibles.

Scientists from five nations brought the latest advancements in Unmanned Underwater Vehicle (UUV) mine hunting technology to the Baltic Sea to demonstrate the vehicles effectiveness in operational scenarios. The BALTOPS Mine Counter Measure Task Group ventured throughout the Baltic region practicing ordnance location, exploitation, and disarming in critical maritime chokepoints.

The European Union Energy ministers agreed earlier in the year that all EU countries should voluntarily cut gas use by 15% from August to March, compared with their average annual use during 2017-2021 and introduced EU-wide targets for refilling gas storage. Even if these goals were achieved there remains a major gap in supplies needed.

The reality is any chance of negiotiating a restoration of gas supplies from Russia is now gone until repairs can be made.

"The damage that occurred in one day simultaneously at three lines of off-shore pipelines of the Nord Stream system is unprecedented," said Nord Stream AG, the consortium responsible for the pipelines. "It is impossible to estimate the timeframe for the recovery of the gas transport infrastructure so far."