Dr. Theresa Tam presented new modelling forecasting COVID-19 cases which shows cases increasing at from 2300 cases per day to over 20,000 cases per day by the second week in March of this year.

There was no upper limit or projected time for a downturn in cases, without increasing restrictions and extending the lockdowns.

The chart contrasts with the current data that shows cases have dropped across the country by over 50% in the past few weeks. 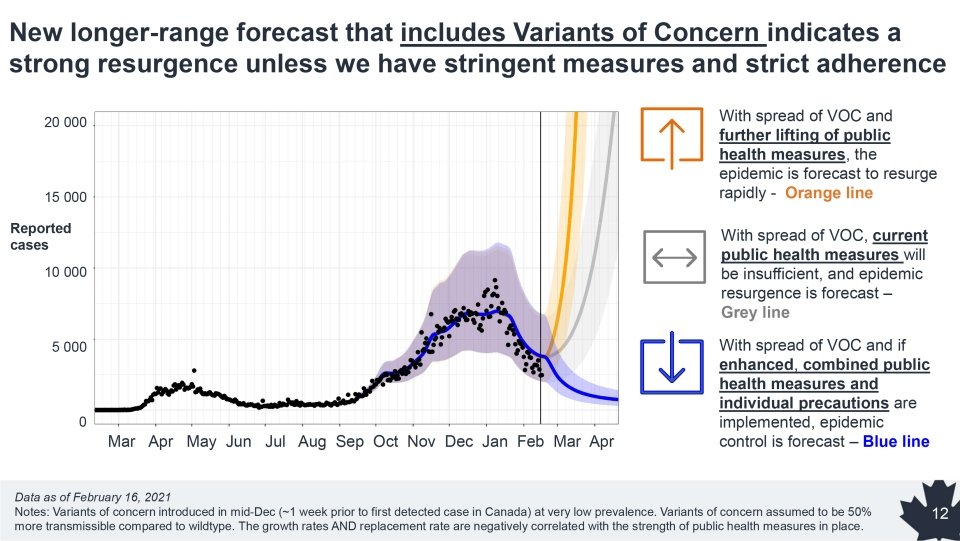 This raised questions from several experts, opposition MPs and some media regarding the data that was used to create the model.

Conservative shadow Minister for Health, Michelle Rempel, asked Public Health Agency of Canada representatives to explain how they came to this forecasting, but they were unable to offer answers.

“We will return to you with the number of inputs that went into those models,” said the acting scientific director general of Canada’s National Microbiology Laboratory, Dr. Guillaume Poliquin.

Ms Rempel said later during the committee hearing that it was problematic for PHAC officials to call for more lockdowns and the continued closure of businesses without being able to defend their work and answer questions about how they got their numbers.

"It is beyond irresponsible for the Liberals to allow bombastic modelling that provoked fear, affects millions of lives, jobs and mental health without providing the assumptions they used to make them. This happened at our committee today."

Numerous senior officials from the Public Health Agency of Canada were at committee today. I asked what data they used to determine that forcing people into quarantine hotels would result in better public health than allowing people to quarantine at home. Their response: 🤷🏼‍♀️ pic.twitter.com/AFmGN9zobm

If the data that the predictions are legit then they need to be published so the model can be verified. Most of the globe remains under some form of restrictions to do modelling that was done over a year ago and never came close to the numbers of fatalities that were predicted. The data needs to be published in order to be verified if they want to keep the trust of the public.

The last thing we need is a 'person who cried wolf' scenario, should the stats prove to be true.