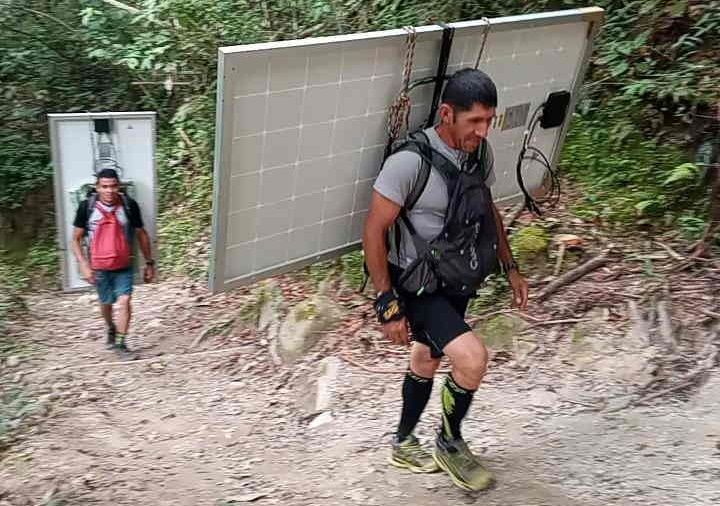 As of this week, the Base Station Crestones Shelter, in the Chirripó National Park –managed by MINAE-SINAC–, has a broadband internet link, as a result of the installation of two high-range wireless antennas near the point highest in the country.

The infrastructure was provided by the Costa Rican Electricity Institute (ICE), at the request of the Ministry of Environment and Energy (MINAE) and the National System of Conservation Areas (SINAC).

The alliance will allow Park staff to communicate in real time from Crestones Base, without having to travel to search for a signal. Mobile reception in this area is often affected by topographic conditions.

The new network provides a symmetrical service between the loading and unloading of data, which allows stability to the access sites web , use mobile apps or video calls. By having this connection, other services could be provided in the future for officials and even visitors to the hostel.

In this regard, the Minister of Environment and Energy, Andrea Meza, stressed that this effort will improve the dynamics of communication and connection in the concessioned services, will benefit the attention to tourism, will favor the approach to emergencies - such as forest fires or loss of people - and It will strengthen the investigation, control and protection processes.

He added that “we are very satisfied and grateful to complete a joint process with ICE, thanks to which we can bring broadband internet to the park rangers team. This allows us to continue making the technological leap that we promote from MINAE-SINAC, in order to generate better conditions and greater security internally, and thereby support the needs of those who work and visit our National Parks every day ”.

For her part, Irene Cañas, executive president of ICE, commented that “bringing broadband connectivity to park rangers at the highest point in the country reflects the technical and professional capacity of our colleagues. We reiterate our commitment to the protection of natural heritage and the task of MINAE-SINAC ”.

In coordination with the System and its park rangers, in August of the previous year, ICE personnel ascended the Chirripó to carry out feasibility tests and find the best parameters for the effective transmission of the signal.

After analyzing four scenarios, the Institute chose the best one for the network connection to be successful. The work, carried out by nine officials, included the transfer of connection equipment and photovoltaic systems that power the antennas.

This advance in the administrative area of ​​the Chirripó National Park joins the improvements made by the Government in this site, which were delivered in August 2020 with an investment of ₡ 600 million. The works included the Bicentennial esplanade as a rest area with a panoramic view of Los Crestones, Cerro Terbi and Cerro Pan de Azúcar, as well as that, with the support of the CRXSiempre Association, a wastewater treatment plant was built for the Crestones Base Shelter and the conditioning of areas for officials and visitors, infirmary, bedrooms, cellar, among others.

Where does the signal come from?

• It originates from a radio base in San Isidro de El General, linked to an access equipment of the Advanced Internet Network (RAI).

• This is connected to another radio base on Cerro Tinamaste, which in turn transmits to Cerro Crestones.

• In the latter, an infrastructure was built that supports the antenna that receives the signal, and redirects it to the new antenna of the shelter.

• Both use photovoltaic systems, capable of accumulating energy to sustain the service for four continuous days in adverse weather conditions.

• The signal travels between San Isidro and Base Crestones a distance of approximately 40 kilometers.

This project will help to make hikes to the peak of Cerro Chirripo safer for hikers and allow the Rangers to transmit notifications of environmental concerns they may witness from the station. This is important since one can see both the Caribbean and the Pacific Ocean from the peak on a clear day.