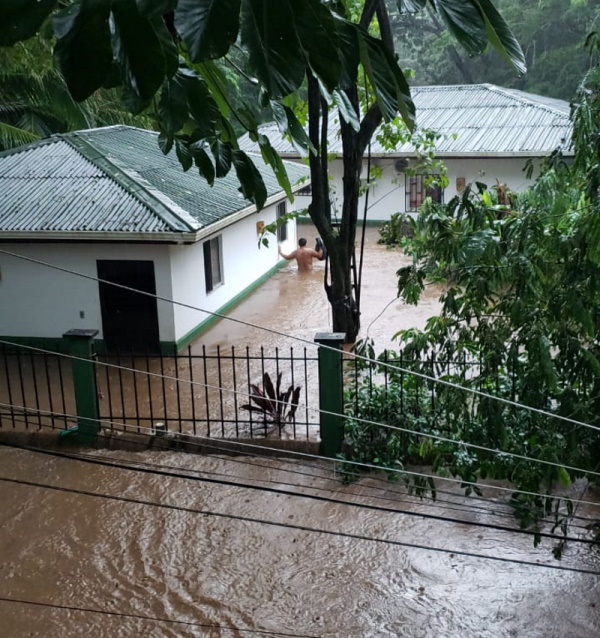 Guanacaste was the hardest hit by heavy rains over the past few days, according to the National Emergency Commission (CNE).

They list 114 flood events that have been attended to throughout the region. In Guanacaste 70 events have been or were attended to since Wednesday morning, mainly due to flooding. The majority of the flooding was concentrated in the cantons of Santa Cruz, Carrillo, and La Cruz. Our area has 6 official shelters holding over 160 people, with many more forced to abandon their homes during the floods, seeking refuge with friends and family.

Surfside and Potrero were especially hard hit as estuaries over flowed their banks before reaching the ocean. There appear to be several new waterways along Playa Potrero were water is still flowing to the ocean, taking the most direct route it can.

The Beach House was especially hard hit as water flowed down the hills behind them, crossing the coastal highway and directly through the restaurant to the beach. Homes along that stretch of road were littered with trees, bushes and dirt blocking entrances to homes.

The Castle, a well known retaurant on the corner of the main street in Surfside was flooded several times over days. Here the flooding was due to the excessive amount of water raging down the street. The Castle is situated on the corner of the paved highway that blocks the water from draining directly to the ocean, past the Sailing Center.

There is a small drainage tube running across the road that should be at least a meter in diameter to allow the water to pass the road. Despite numerous complaints to the Municipality and MOPT who are responsible for raising the height of the pavement, the corner remains a bottleneck for water whenever we get a heavy rain.

Even the Shack Restaurant in midtown Surfside was flooded repeatedly from the waters raging down the main street.with nowhere to go once the waters started to get backed up.

This storm was exessive in the amount of water it dropped on the region, and all of that water heads to the ocean.

In Potrero, the main street became a raging river blocking off the town from higher ground, other than Pacific Heights which was impassable, or further up the beach highway towards Sugar Beach and Las Catalinas. Several homes and businesses were wiped out.

Homes along Potrero Beach were assaulted both by floodwaters from the over flowing estuaries and the waves from the high tide that coincided with the peak rainfall. Pools were filled with sand and debris that washed up over the beach and flooding several homes. Many will be cleaning up the damage for weeks to come.

It's important that we all do what we can to help our neighbours and do what we can to recover. And be sure and thank those men and women who are out there in the rain restoring power, clearing roadways and doing their best to keep us safe. A cup of coffee and or simply a smile and wave go a long way.