The Surfside Property Owners Association (SPOA) has released an released an update. The first since back in April of 2020 when they released the first quarter financial statement.

It's now September and the SPOA wants people to know they have been working diligently on a solution to the drainage issues we face as a community. These issues peaked during the flooding last week where many homes and businesses were flooded and some residents forced to seek shelter with friends or family.

Some roads are still impassable with mud and tree stumps blocking the few drainage ditches that exist. Even the main road passing through Surfside, where drainage ditches are maintained, overflowed flooding homes, restaurants and green zones which are lower than the roadway, thanks to the last resurfacing of asphalt. The streets north of the main road became waterways as water tried to reach the ocean, with estuaries filled to capacity at high tide.

Part of the problem is due to the lack of drainage passing the aptly named Route 911. The community did not add several layers of asphalt to this road, with inadequate drainage.

There is one small drain at the corner where the Castillo and the Bahia del Sol Hotel are located. Large volumes of water follow the roadside ditches along Paseo Surfside westward to this drain. Mariposa and the north side of Mango Street, as well as water flowing through the green zone reach Route 911 and are redirected to the same drain to the north creating a convergence of water that cannot pass the raised asphalt. The drain is overwhelmed and the water rises flooding homes and places of business.

From Mango Street south, the water on the east side of Route 911, is directed south to the estuary, where the bridge and the new Welcome to Surfside sign are located. Again unable to pass the roadway and as the water backs up due to excessive volume, it begins to flood the streets. This was evident on Banano and Aguacate.

In a similar situation, water draining along the roads north of Paseo Surfside are blocked from reaching the ocean and water instead flows to the northern estuary along calle Playa Norte and Avenida Una. The water in this estaury reached the level of the bridge leaving the water on these streets nowhere to go and resulting in widespread flooding of these homes.

The proposal by the SPOA addresses some concerns over Roads and Drainage within Surfside but requires additional funding to hire a professional contractor at a cost of $15000USD to perform the following:

The proposal can be read here.

They also note :"There are 7km of roads in Surfside. The work is being planned for the end of October when there is still moisture in the roads. It will take 7 days, 9 hours per day. The estimated price is $15,000.00 for all material, labor and machinery. "

This breaks down to a cost of over $2100 USD per day or $238 USD per hour for a grader, backhoe and road packer. That could be a reasonable cost depending on how many truckloads of "crushed material" are used. That is not mentioned in the proposal nor is there reference to other quotes aquired from additional sources, as is required under any Association guidelines in Costa Rica.

While this work is clearly needed and it is doubtful there is anyone in the community who would not want to see this work completed, the SPOA doees not have sufficient funds and the proposal does not address the underlying problem. The water has nowhere to go.

As a planned community, Surfside Estates had several access points to the beach, through green zones and pathways that allowed the public access to the beach at several key points. Several of those are gone, sold as building lots and since built up with homes. Those points that remain could provide an opportuntiy for installation of additional drainage for times of excessive rainfall, if proper drains are installed and maintained. 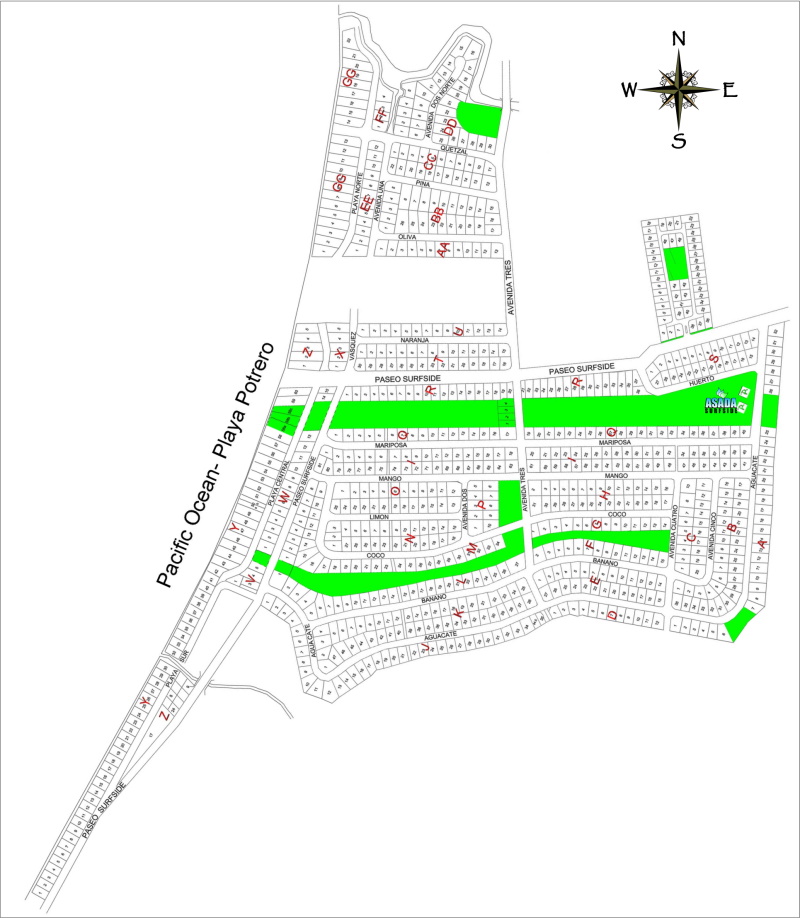 Large drains could be installed on Calle Queztal similar to what exists beside the Costa Rica Sailing Center. Other large culverts need to be installed passing Route 911 to allow some water to reach the ditch on the other side of the roadway. There is also a public access to the beach beside the Endless Beach condos that could have a drain installed to drain water along Playa Central.

Up until a few years ago, the Surfside ASADA took responsibility for maintaining the ditches throughout the community. It made sense because the ASADA knows where the main waterlines run throughout the community and they had the revenues to do do the work. Ditches were maintained, roadways were graded prior to and following the heavy rains lasting from late August to October. The ability of the ASADA to continue this work was taken away by a ruling from the AyA, preventing the ASADA from using their surplus funds for road maintenance or maintence of drainage.

Sewerage by it's definition includes sewage and storm drainage.

According to the Surfside ASADA website "ASADAS are committed to ensure and preserve a healthy and ecologically balanced environment.... For achieving this, ASADAS may handle necessary actions, as implementing an environmental management program".

Since Sewerage in our community currently relies on individual septic systems, installed and maintained by the property owners, that still should allow the ASADA to manage storm drainage. Any environmental issues that put septic systems at risk due to flooding, could be considered as part of an environmental management plan. If AyA does not consider storm drainage to be an responsibility of the ASADA then publicly explain why it's part of the name of the Association and stated in the bylaws of the organization.

What greater environmental risk do property owners currently face than floodwaters carrying contamination from septic systems, roadways and surrounding farmlands, entering their homes and business. It's a matter of health, safety, environmental protection, and common sense.

The ASADA has a surplus of funds that could go towards a solution, if the Municipality agreed to work with them to provide the easements and necessary support.

If AyA refuses to allow the ASADA to make use of their surplus funds, perhaps the ASADA could be hired for a small fee or pro bono by the SPOA to manage the project, since they will likely need to be involved with any outside contractor digging ditches to ensure they do not damage the water supply lines running throughout the community. And likely they could do so at a lower cost.

Whether solutions to these issues fall upon the Municipality of Santa Cruz, who are responsible for maintaining the roads in our area, or upon the SPOA or the ASADA, is a matter that should be urgently discussed and resolved. Not at the end of October... now.