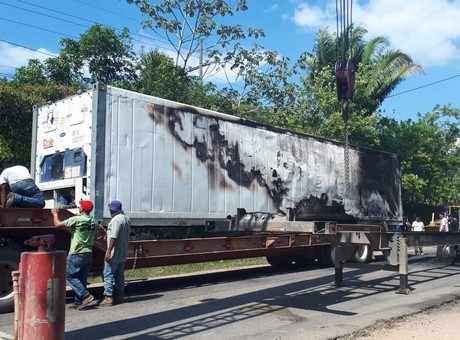 In Honduras this Sunday, protesters burned and looted some 30 shipping containers marked with the logo of the Dole Food Company. This becomes the second attack in recent days on symbols of U.S. power in the Central American nation.

Protests against U.S.-allied Honduran President Juan Orlando Hernandez have been building in recent weeks over planned reforms that Hernandez’s critics argue will lead to the privatisation of public services.

The attack on the convoy of trucks took place in rural Honduras early on Sunday on a road passing through a village known as Guadalupe Carney, some 330 km (205 miles) from the capital, Tegucigalpa.

Protesters torched an access gate to the U.S. Embassy in Tegucigalpa on Friday, setting fire to about a dozen tires after dousing them with fuel.

It what was not immediately clear what triggered the attack on the fruit trucks. Media carried images in which scorched white containers on trailers emblazoned with the Dole logo could be seen, along with at least one badly burned truck tractor. Fruit boxes could be seen in one open container.

“Until now we have 32 burned containers and practically everything that was in those containers was looted,” Leiva told Honduran media outlet Diario Colon Hn. Dole Food Company did not respond immediately to a request for comment.

Fruit companies have a long history in Central America and in the past were linked to U.S. domination in the region.

In Guatemala, the expropriation of lands belonging to the United Fruit Company, a predecessor of Chiquita Brands International, contributed to the U.S.-backed overthrow of the President Jacobo Arbenz in 1954.

Hernandez has been under pressure since he changed rules to allow him to run for a second term in 2017, winning a race that was heavily criticized by international observers and which his opponents say he stole.

U.S. court documents related to the trial of his brother for alleged cocaine trafficking revealed last week that the president had also been investigated by the U.S. Drug Enforcement Administration.

Hernandez acknowledged the investigation but said the DEA had found no evidence of wrongdoing.