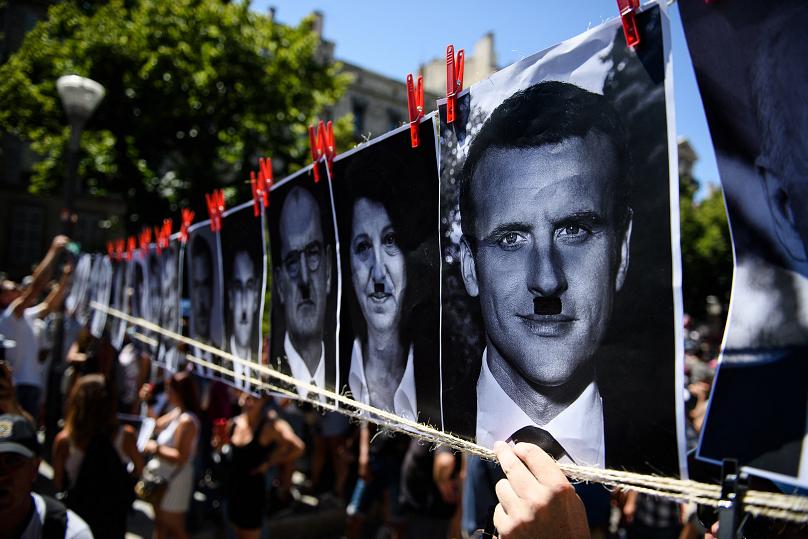 President Emmanuel Macron will require health care, nursing home, restaurant and bar workers to get the vaccine, and everyone will have to show proof of inoculation or a negative test to do just about anything in public.

While the prospect of having to show a so-called COVID vaccine passport is controversial, but that is essentially about to happen in France, where about 40% of the public is fully vaccinated. It is not unexpected as Macron is clearly on the side of the globalists, especially in matters related to covid and lockdowns.

In a recent address to the nation in regards to the pandemic and new regulations, Macron stated the following.

"We are a nation of science, of Louis Pasteur," he said. "The vaccine is our only way back to normal life." So far, shots are not mandatory for everyone, but starting in August, people will have to show a vaccine pass or negative test if they want any kind of social life - if they want to go to bars, restaurants, museums or get on a train. And as of September, COVID tests will no longer be free.

Polls show 10% of the French population say they will not get the COVID vaccine no matter the pressure. Thousands of vaccine skeptics hooked up with others, including anti-Macron yellow vest protesters to demonstrate in several cities this week. They chanted liberte and we are not your guinea pigs.

Of course once again, in the globalist circle there is no talk whatsoever about natural immunity to the virus, which is evident in other virus or bacterial infections.They ignore the science regarding hundreds of millions exposed and recovered individuals, and whether hey should require a vaccine, considering they shoud have developed antibodies to fight SARS-Cov-2 during their recovery

The traditional defined purpose of a vaccine was to stimulate a person's natural immune system to produce antibodies to fight off the infection. Common sense would indicate that if one had the virus and recovered one would expect them to have the antibodies, and hence would not require a vaccine. That is not to say that those who tested positive or those who had the virus are all immune forever.

What is missing from the discussion is any consideration of those who have the antibodies since the role of vaccination is to induce the same result. Somewhere during the past few years, this concept was dropped from the conversation altogether.

As recently as June 9th 2020, the World Health Organization (WHO) described the process as follows: "Herd immunity is the direct protection from an infectious disease that happens when a population is immune either through vaccination or immunity developed through previous infection."

For some reason the WHO has recently revised their statement on "herd immunity" to this: "Herd immunity, also known as population immunity is a concept used for vaccination, in which a population can be protected from a certain virus if a threshold of vaccination is reached." No mention of natural immunity, or immunity developed from previous infection.

No one can say what the reasons are for the change, considering the decades of published research that contradicts this restrictive definition. It does indicate there are factors not related to science that are at play here.

Why should politicians be demanding 90% vaccination levels before we consider achieving 'herd immunity' and a return to normal, if that is even possible anymore. Without mandatory vaccinations or negative inducements that is likely unachievable.

Further moves on the part of government to stifle this discussion through banning the topic outright or its debate in scientific circles will lead to further skepticsm of the crisis.

Given recent protests in France, UK, Greece and elsewhere, we need reason and debate to successfully address the issue and provide realistic solutions.